Our Beach walk. We planned the long beach walk from Grotto beach on the east of Hermanus. At the point where the Klein Rivier flows into the sea, to Klipgat Cave at De Kelders. The planning of the beach walk is important because if the mouth of the Klein Rivier is open to the sea one would need to cross at low tide.

For our beach walk it wasn’t necessary because the mouth is still closed. And because at this stage it doesn’t look to be likely to open because for the drought that South Africa is experiencing at the moment. Therefore we prepared mentally for the beach walk. We were told it was total distance of between 14 and 18 kilometers. It was a hot sunny day, we measured the actual distance 18.5 kilometers with a GPS.

We stopped for lunch and another coffee break at a Shale outcrop that we came across at around the 15 kilometer mark. We managed to find some shade to escape the sun and the building heat of the day. So with the end in sight we continued the walk towards the cliff with Klipgat cave situated at the base. So we had a very clear destination. The final part of the beach walk has many rocky protrusions that one cannot pass on the seaward side regardless of the tidal conditions.

This is where the going gets tough because anytime one walks on the beach its hard going. Therefore prepare to walk through thick beach sand or to negotiate boulders or rocks. On a beach walk that’s just part of the deal unfortunately. Our timing was fortunate because the climb from the beach at the base of Klipgat cave onto the fairly steep rocky cliff path. We were headed to the car park where we were meeting our lift.

This part can be problematic if the tide is in too far. We have done the walk again, but this time we walked from De Kelders back to Grotto beach. So its possible to to it in either direction depending on when its best suited for low tide.

Select your next break from our holiday options below 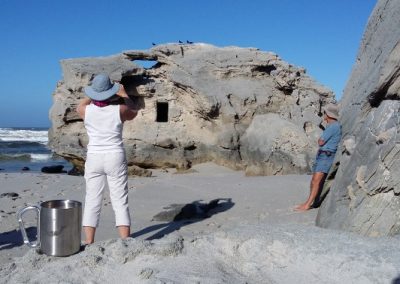 Lunch at the cave

We planned the beach walk for Tuesday the 29th November 2017 because that was “New Moon.” The time of the lunar calendar when the Sun, moon and Earth are all in a fairly straight line. Because these conditions produce spring tides, in which the high water is higher, and the low water is lower than average levels. Allowing us the flexibility to walk around the seaward side of any rocky protrusions. This would normally not be possible because of the water.

Because the forecast low tide for the day’s beach walk was at 09 h 03 so we departed from Grotto beach at 06 h 00. Giving us 3 hours of walking before the tide was fully out. And another 3 hours to exit the beach at Klipgat cave. Sun rise was 05 h 22 and we started the walk in the cool of the early morning.

We chose to walk on the firm wet sand of the receding tide which made for easier walking. So we covered 5 km per hour at a good easy pace. We reached “Soopies Klip” a well known rock outcrop just over 6 km from Grotto beach. Fishermen have used Soopies Klip for many years. So they have built a door into a cave on the landward side of the cave for shelter from the elements.

We brewed a welcome cup of coffee on our portable gas cooker and had a bite to eat while we relaxed and enjoyed the magnificent scenery. After a short 30 minute stop we continued the walk as the tide continued to recede as it was still only just after 08h00. The remainder of the walk was very beautiful but uneventful. We encountered a few patches of soft fine sand that made the going a little more difficult. Please provide the following items for your walk or hike

Because of the Covid-19 Pandemic, unfortunately the world we live in has changed forever. Please note that all the prices quoted  are subject to change because of local and global conditions.

Obviously we will try our best to stick to the the prices as quoted throughout this vast website. Any changes will be communicated at the time of booking, and your booking confirmation price will remain fixed.

As a result there have been many additional restrictions placed on us (Africansunroad.com) by our suppliers and providers, some of which we have been required to pass on down the line, and we trust that you understand.

Please be advised that all quotes expire after 14 days from the date they are sent, thereafter amended prices may apply.