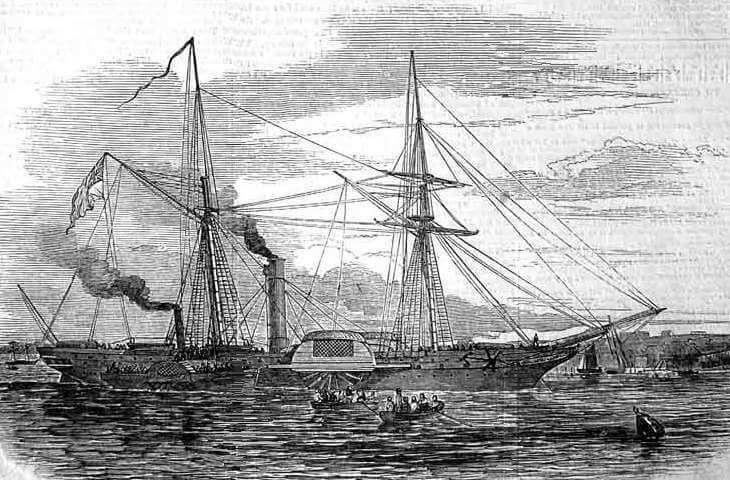 The town of Birkenhead is situated along the west bank of the River Mersey, opposite the city of Liverpool on the west coast of England. This is where the HMS Birkenhead was laid down, at John Laird’s shipyard in Birkenhead. Initially as the frigate HMS Vulcan, but then later renamed to Birkenhead, after the town where she was built. She was one of the first steel hulled ships to be built. There was a move away from the traditional ‘wooden hulled ships of the time’ to the new steel hulled designs.

Understandably sailors of the day were very skeptical, not believing that a steel hulled ship could float. After all, wood floats on water, while if a piece of steel is thrown onto water it sinks rapidly. She had another modern innovation, two 564 horsepower (421 kW) steam engines from Forrester & Co. That drove a pair of 6-meter (20 ft) paddle wheels, and two masts rigged as a brig. So Birkenhead was able to utilize wind to sail, or steam power in calm conditions.

Birkenhead was kept around England for a few years. She departed from Portsmouth on the south coast of England, west of the English channel for Cape Town on 7th Jan 1852. She arrived in Simons Bay on 23 Feb 1852 a journey of 47 days. Birkenhead  was carrying 240 000 pounds of gold, and on the journey 4 women died and 3 babies were born.

On the afternoon of 25 February 1852 the Birkenhead departed Simons Town for the Eastern Cape to transport troops to fight the Xhosa wars. The conditions were calm as Birkenhead sailed past Walker Bay towards Danger Point. The Leadman had just called “Sounding 12 Fathoms” or 72 feet, when the Birkenhead rammed the rock. She struck the uncharted rock about 1.5 nautical miles or 2.7 km off shore at 02 am in the morning, of 26 February 1852.

In the ensuing chaos, with men escaping their bunks and many drowned in the rapidly filling hull, wearing only shorts. February is one of the hottest months in The Cape, with temperatures reaching well into the 30’s in Deg Celsius. The crew on deck that were on duty that night were trying to lower the life boats. Only to discover that 6 of the 9 lifeboats were stuck because the lowering mechanism was to rusted to operate. The captain of the ill fated Birkenhed, ‘Captain Salmon,’ ordered the men to stand firm. The women and children were put onto the 3 serviceable lifeboats. Thus the now famous naval tradition was born ‘women and children first.’

After the lifeboats were clear of Birkenhead, Captain Salmon ordered the engines into reverse in an attempt to free the ship. This was a fatal move, Birkenhead began to breakup and sink. The infantry officer, Captain Seaton,  in command of the troops took charge and gave the order ‘every man for himself.’ There were 638 souls on board the Birkenhead, crew and troops jumped into the icy waters in the dark of night. The Gansbaai area where Danger Point is located, is now world famous as a Great White shark cage diving location. Many people couldn’t swim  and hung onto those that could, forming big groups supporting each other all trying to survive. The moon was approaching ‘first quarter’ so there was a bit of celestial illumination to show which direction the shore was, on a clear night.

Before departing Simons Bay for Port Elizabeth, 9 horses were taken on board to supplement the numbers already in Algoa Bay. After Birkenhead struck the rock the horses could be heard kicking and whinnying in their stalls, sensing the danger. The horses were released from their stalls to allow them to escape the sinking ship.

The sharks arrived and tore into the groups of survivors as they frantically tried to fend the beasts off. Men without clothing were taken before the clothed crew that were on duty at the time of sinking. After what must have felt like an eternity groups of men reached the rugged barnacle covered rocks of the Danger Point coast. Only to be skinned alive as they were pounded by the waves when they crawled to safety. Of the 638 souls, 445 perished and only 193 men managed to survive the ordeal. Not one  woman or child perished.

One of the horses broke a leg as it escaped the sinking ship, and some of the others apparently made it to shore. Legend has it that the authorities realized the fate of Birkenhead when one of the horses made it back to its stall in Simons Bay. Some of the horses joined the ‘wild horses’ of Kleinmond, a town about 30 kilometers from Hermanus in the direction of Cape Town.