The climb to the top of the Kogelberg Three sisters trail reveals new displays of Fynbos magic around every turn and boulder. We found a reasonably flat area with a great view for a well deserved coffee break. For our coffee/tea breaks we have a MSR (Mountain Safety Research) Butane and Propane gas cooker that sounds like a jet engine when its burning and heats water very quickly. We use the mountain water, colloquially called Fynbos tea because of the tannin colour imparted into the water by the decomposing Fynbos Proteas on the route 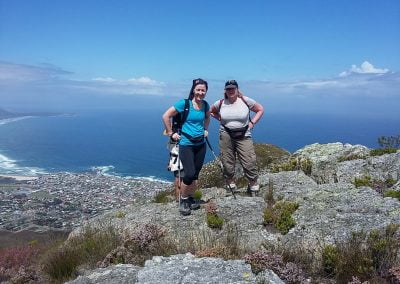 On the high point The trail is in the Overberg mountain range.The Table Mountain Sandstone that makes up the Cape Fold Belt Mountains where the Fernkloof and Kogelberg reserves are located is made up of nutrient poor soil. Lacking in Nitrogen and Phosphorous, required for protein synthesis. The predominant Fynbos vegetation on the Three sisters trail is Proteacious and because Nitrogen and Phosphorous needed for protein synthesis are lacking excess organic carbon is produced from photosynthesis. This excess carbon is channeled into the production of non-proteinaceous compounds such as woody fibers and tannins.  Protea leaves are Sclerophyllous, which means the leaves are hard and leathery (ligneous) snapping rather than bending. Their heavily lignified tissue stops them from wilting when water is scarce. This may slow down photosynthesis but continues to photosynthesize long after other leaves have wilted.

Longer lived than ordinary dorsiventral plant leaves – considered an energy saving attribute that makes the Fynbos covered Kogelberg Three sisters trail so special. With their high ratio of carbon to nitrogen Sclerophyllous leaves are indigestible to most insect larvae because insects require nitrogen for protein synthesis. Similarly few animals eat protea leaves as a high carbon to nitrogen ratio is compounded by low levels of trace elements which are essential to a herbivores diet. High levels of tannins impair the action of digestive enzymes in the gut making digestion inefficient. After our coffee break we set off to have a packed lunch and some more coffee on the peak of the third and highest of the sisters at 360 meters. After our trail we visited the Stony Point Penguin colony, see pics attached.

Please Note: Kogleberg hikes may be subject to additional transport charges - the hiking office at Kogelberg Reserve is a 80 Km round-trip from Hermanus. The cost will be calculated for the applicable hike date.

Half day or part thereof, includes tea, coffee and muffins. R 700.00 per person minimum 2 people. There is a charge of  R 350.00 per additional person.

Exceeding 5 hours include tea or coffee and muffins in the morning and a packed lunch with fruit juice for lunch; please contact us for a quote