The Central Kalahari Game Reserve is an extensive national park in the Kalahari desert of Botswana. Established in 1961 it covers an area of 52,800 km² (about twice the size of Massachusetts, and 1/11 of Botswana’s total land area) making it the second largest game reserve in the world. 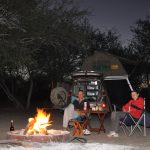 Ralph and Gill at Passarge Pan 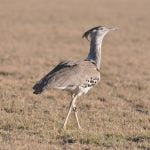 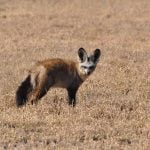 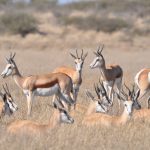 Our Central Kalahari Safari offers opportunities to see wildlife such as giraffe, brown hyena, warthog, cheetah, wild dog, leopard, lion, blue wildebeest, eland, gemsbok, kuduand red hartebeest. The land is mostly flat, and gently undulating covered with bush and grasses covering the sand dunes, and areas of larger trees. Many of the river valleys are fossilized with salt pans. Four fossilized rivers meander through the reserve including Deception Valley which began to form around 16,000 years ago.

The Bushmen, or San, have inhabited the lands for thousands of years since they roamed the area as nomadic hunters.

However, since the mid-1990s the Botswana government has tried to relocate the Bushmen from the reserve, claiming they were a drain on financial resources despite revenues from tourism. In 1997, three quarters of the entire San population were relocated from the reserve, and in October 2005 the government had resumed the forced relocation into resettlement camps outside of the park leaving only about 250 permanent occupiers. But in 2006 a Botswana court proclaimed the eviction illegal and allowed them to return.

A huge bush fire took place in and around the park in the mid of September 2008 and around 80 percent of the reserve was burnt. The origin of the fire remains unknown.

Sitting in the camp at Passarge Camp 1 the solitude is absolutely amazing, if Passarge 2 is occupied then the closest human will be 3 km away but if its not occupied then your closes human could be over 20 km away. Depending on the time of year that one visits Central Kalahari the vegetation may be very sparse in the dry season and green and plentiful in the rainy season. The predominant antelope are Impala, Springbok, Tsessebe, Gemsbok, Red Hartbeest, Zebra and Wildebeest. In the dry season its easy to see the Honey Badgers marauding through the bush while in the long grass of the wet season they are often hidden. 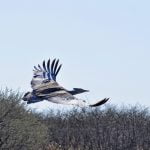 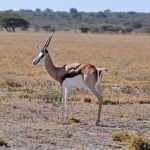 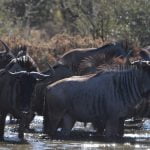 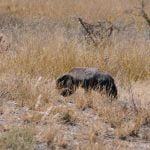 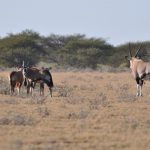