We went to see the wild flower display that occurs annually in August on the Cape west coast. After a lovely evening camping in the Cape Columbine Tietiesbaai reserve we travelled north to Paternoster where we saw an amazing floral display.

It was a last minute decision to go to Tankwa, but we were towing our 4X4 camping trailer for this purpose because we wanted to be free to stay where we ended up each day.

Tankwa (short for Tankwa-Karoo) National Park situated in Tankwa Succulent Karoo Biome, was proclaimed in 1968 and currently consist of nearly 146 400 hectare or 1464 square kilometre. The vegetation is classified as Succulent Karoo, and is divided into 12 distinct vegetation communities. The park boasts with numerous endangered and endemic species of birds, mammals and plants, with additional species being added yearly as further research is done.

We entered the Tankwa-Karoo national park in Tankwa Succulent Karoo Biome from Paternoster. It was a long dusty drive and we entered the Tankwa national park from the south west at the Oudebaaskraal Dam. The dam was built in 1969 by Judge Alwyn Burger, and was the largest privately owned dam in South Africa, until taken over by the park in 2007. It is built on the Tankwa River and has a water capacity of 34 million cubic meters. The drive from the entrance gate which is a cattle grate with a Tankwa-Karoo national park sign, to the Roodewerf Office is around 31 km. The corrugations on the gravel road are very bad in some places, and one has no choice but to slow to an absolute crawl. Gill made the last minute booking by cell phone while I was driving and because the park was full of guests looking at the flower display, the only camp that was available was at Volmoedsfontein on the western side of the Tankwa Succulent Karoo Biome. A very remote camp with no facilities at all, it has no water, toilets or ablutions of any sort. When we collected our booking and campsite confirmation, pinned to the notice board at Roodewerf office we discovered that we had to travel 19 km back along the way we had just come to our campsite at Volmoedsfontein. We arrived at out camp at twilight and had just enough time to open the roof top tent and braai hamburger patties to go with the buns we had bought the day before. A strong warm wind picked up during the night but a roof top tent is great, because it’s always dry and very secure with no ropes and pegs to work loose with the buffeting wind.

We awoke the following morning to a calm windless sunrise, and the sound of the resident Kalahari Robyn’s competing for the prime calling points with the Tractic Chat. As our morning coffee kettle boiled, we watched the vast Karoo plains brighten with the rising sun revealing the sparse patches of remaining flowers, and saw a herd of 21 Gemsbok crossing the distant plane onto their latest feeding area. Later we were told that the flowers had come early this year and that we had missed the vast masses. As the sun rose higher we were able to see individual Springbok at various points in the Karoo bush. After coffee and breakfast we explored the camping area and discovered that Volmoedsfontein is an old abandoned farmhouse with outbuildings and sheep kraals built by some person or family that settled that area in the Tankwa Succulent Karoo Biome many years ago.

A biome is an extensive ecological unit, largely defined by climate, representing major life zones of large natural areas. In South Africa biomes are also defined in part by major, large-scale disturbance factors such as fire, as is the case in the Fynbos Biome. Each biome has a characteristic set of plant species, and we can recognize a biome by its overall landscape structure and by the types of plants that occur there. The general plant characteristics provide a very distinctive appearance or visual signature that is specific to each biome. South Africa has been divided into various ecoregions with a number of recognized biomes. The level of refinement depends on the purpose for which the classification of the biomes is to be used; the basic classification divides the South Africa into nine distinct biomes. One of the few larger bushes Our site from a distance

Tankwa-Karoo is situated in the “Succulent Karoo Biome” which is confined to the west of South Africa, north of the Cape Fold Belt Mountains and south of the southern Namibian border. Essentially the Biome runs along the South African west coast and inland. Most of the biome is composed of flat to gently undulating plains, with some hilly and broken rocky areas. The altitude is generally below 800 m in the east, in the transition to becoming the Nama Karoo Biome; in places it reaches over 1000 m above sea level. There is little difference between the soils of the Succulent Karoo and Nama Karoo Biomes. Both are lime-rich, weakly developed soils on rock, the amount of rainfall is the major difference. The Nama Karoo has very low rainfall of less than 70 mm per annum, and the Succulent Karoo has from 70 to 290 mm per annum.

The Succulent Karoo Biome is primarily determined by extreme summer aridity and low winter rainfall. The rains are cyclonic, and not due to thunderstorms, and as a result the erosive power of the running water is far less than that of the summer rainfall biomes. During the summer months, temperatures in excess of 40 degrees are common. Fog is common closer to the coast and frost is infrequent. Hot Berg winds may occur throughout the year and these dry out the land and the vegetation. The vegetation of this region can broadly be described as xerophytic, semi-desert shrubland with a large number of succulent-leaved species. Xerophytic plants are adapted to growing in a very dry or desert environment. The number of plant species, mostly succulents, is very high and unparalleled elsewhere in the world for an arid area of this size. 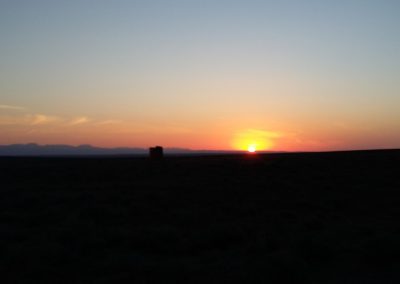 The Succulent Karoo Biome is dominated by.

Grasses are rare, except in some sandy areas.

A number of specialized insects each feed only on one specific local plant, and the resulting pollination helps to maintain the diversity of the plant communities. Many species of Monkey Beetles only move limited distances, and therefore pollinate plants occupying relatively small areas. This may be part of the reason for the very large numbers of species of the Family Aizoaceae formerly Mesembryanthyemum. This in turn leads to the presence of some-insect eating birds that are tolerant of the arid conditions. This region is also rich in endemic vertebrates, especially small mammals, such as mole rats and the suricate, often called meerkat, and reptiles such as skinks. The larger mammals are restricted to a few small antelope, particularly springbok, including brown hyaena can caracal.

Other species that can be found in the Succulent Karoo Biome include the following;