Whales-Southern Right Whale, have visited our South African coastline for centuries and Hermanus is one of their favourite playgrounds.

Southern Right whales were given their name as they were considered the right whale to hunt because they were found close to shore and they floated once they had been killed, allowing them to be towed to land. 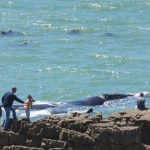 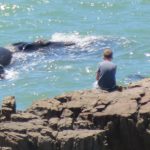 Hermanus on the cliffs 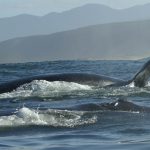 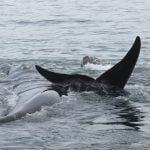 The Southern Right Whale in the mating season 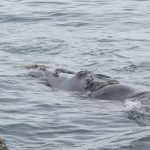 Whales just off the cliff 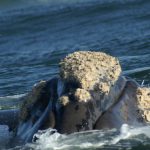 The Southern Right whale measures up to between 14-18 meters in length and weighs between 50 and 60 tons. It is very easy to identify as it has no dorsal fin and there are no pleats or throat grooves. Their tail flukes are large and pointed at the tips and the head is very large with a deeply arched jaw-line. Their head and back at roughly at the same level. Individual Southern Right whales are distinguished by the white callosities on the head, with the largest of these being the “bonnet” which is found on the front of the snout. Generally the body colour is dark grey to black with some white patches on the under parts. The pectoral fins are shaped like paddles. The Southern Right whale usually blows when much of the back is exposed and when diving, the flukes are clear of the water.

Known as a baleen whale, the Southern Right Whale ( Eubalaena Australis) spends the southern hemisphere summers in Antarctica feeding and then moving to the warmer latitudes during the winter months to calve and mate. Southern Right Whales fall under the suborder Mysticetes which are characterized by having baleen rather than teeth.  Baleen whales do not have teeth but instead they have baleen plates consisting of an elastic, horny material which forms fringed plates which hang from the upper jaw of the Whales mouth, almost like venetian blinds. Southern Right Whale baleen consists of long black plates measuring up to 2m long. When these whales feed they swim with the mouths open engulfing plankton or krill in the huge mouths. The Blue whale may take in as much as 70 tons of water in each mouthful. The whale then shuts its mouth and presses its tongue up against its palate and in so doing forces the water out of the mouth while trapping the plankton and krill on a mat of overlapping baleen plates. The hairs on the inner edge of the baleen plates act as a sieve, separating tiny Planktonic prey from the water. Although Southern Right whales do feed on krill their principal food is small crustaceans known as copepods.

A typical pod of Southern Right whales normally consists of fewer than 6 individuals which is usually a family unit. After a gestation period of 12 months a single calf is born weighing in at around 1 ton and having a length of 6 meters. Calves are often white and grow about 3 cm per day and while suckling will feed on about 600 liters of milk per week. Southern Right whales give birth in South African waters from about June to September, generally peaking in August. Females normally give birth every 3 years.

The easiest and most commonly seen whale seen close inshore in South Africa during the months of May to December is the Southern Right. Some of the best viewing sites for this species are

Hermanus is considered one of the best land-based whale watching venues in the world.