Before we look at the Addo Elephant its probably a good idea to consider the African elephant ‘Loxodonta africana’ in general.

Habitat and Distribution       Every habitat in Africa with adequate food, shade and water including swamp, rainforest, woodland, savanna, desert, grasslands, hills mountains and semi-desert. The Thicket Biome which comprises 6 types of thicket, and the Addo Elephant Park is found in the Spekboom Succulent Thicket. This is best developed in the Western and Eastern Cape Province and the Little Karoo.

We first visited Addo 30 years ago, back then it was a sanctuary for just over 100 elephants in the 8596 hectares of evergreen bush. The bush largely consists of ‘Spekboom’ also know as elephant bush.  Spekboom is edible and has a high nutrition value. The succulent leaves and stem provide the Addo wildlife with water and protein.

Addo Elephant  Park was proclaimed in 1931 to save the remains of the herds of elephant that had been almost hunted to extinction, only 11 elephants remained. So for the first 25 years the original park was 2000 hectares and was divided into two separate camps

Today the Park extends over 180 000 hectares and includes a marine area making it South Africa’s 3’rd largest and most diverse conservation area. The park contains over 600 elephants, 400 Cape buffalo, 48 black rhino, leopards and a variety of other antelope and animals. Lions and spotted hyenas were introduced in 2004. In the Marine Protected Area the Southern Right Whale and the Great White Shark complete Addo Elephant Parks ‘Big7’.

Our recent visit to Addo was on our return from Johannesburg to Hermanus which is where we live. The place has been transformed since our last visit with a lovely selection of accommodation to choose from. The park is well run, very neat and Addo Main Camp has The Cattle Baron Grill & Bistro a great restaurant for meals from breakfast through to dinner.

In most African elephant populations, as few as 2 percent of the cows lack tusks. But among Addo’s 300-odd females, the rate is 90 percent to 95 percent. Telling female and male elephants apart can be tricky and is exacerbated because the bulls have internal testes. When watching the videos, look at the elephants forehead in profile and notice that the females have a more angular profile while the males have a rounded forehead.

Anna Whitehouse, an elephant expert who has studied the Addo population for many years, said the number of tuskless elephants increased steadily after the park was founded in 1931, reaching 98 percent by the early 2000s.

All of them descended from those original 11.

But Whitehouse attributed that to inbreeding among the small number of animals, a phenomenon known as “genetic drift,” rather than because of natural selection due to poaching.

At least partly as a result, Addo’s elephants have also been spared poaching.

We have have been on many overland excursions in Southern Africa, therefore we are able to offer guided and fully catered holidays. Please feel free to contact us if you would like to inquire about any of our numerous trips. Angled forehead of a cow Rounded head of a Bull 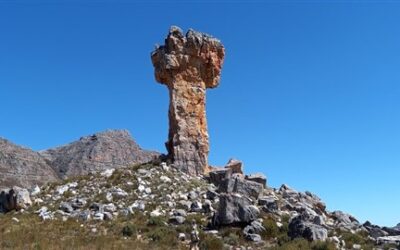